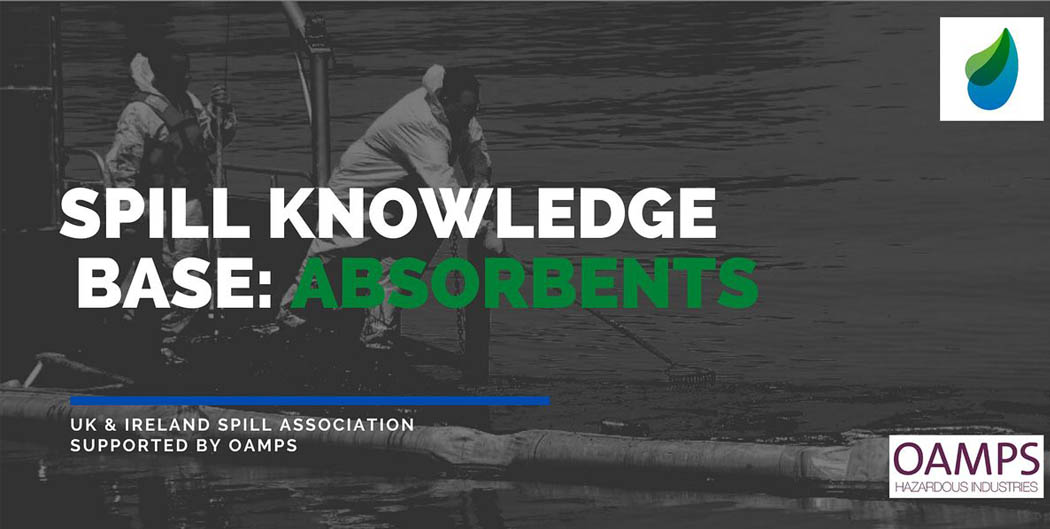 14 April 2021 : Marine Dispersant: What is available, where and how to deploy them that will be presented by Ayles Fernie from OSRL

MV Wakashio Part 4 : Update and the spill cleanup part that will be presented by UKEirSpill and Poleyco

19 May 2021 : Temporary storage tanks for use in spill response

16 June 2021 : Marine special equipment: What is available and how should be it used to be presented by Elastek

Mark Orr highlighted the importance of absorbents in referring to Wakashio incident. He underlined that 3.5 Km conventional booms and 56.6 km bagasse booms made by the local people as well as 12 skimmers were deployed to contain oil at sea.

Danny Matthews delivered a presentation titled “Sorbents and their use in spill cleanup”. He started by introducing Darcy Group as UK leader and pioneer in environmental protection since 1995. The group specializes in the manufacture and distribution of products and solutions that protected the environment. He then defined the sorbent, adsorbent and absorbent indicating that the sorbent is a solid material which can actively fix a liquid in a semi-solid for and facilitate its lift-up by manual and other means. He also explained the difference between the adsorbent and absorbent saying that adsorbent is a material characterized by rapidity, poor to good retention of liquid and relatively low sensitivity to liquid viscosity. For absorbent, he stated that it is a material which relies characterized by swelling, relatively slow action, good to excellent retention, ability to suppress vapor and high sensitivity to liquid viscosity.

Danny Matthews introduced the modern sorbents highlighting their properties and benefits; which are: High sorption and retention, chemical resistance and wide variety of forms, safe and easy to use, flexible in application, easily disposable and environmentally acceptable. He explained that the modern sorbents can be used on land and water and cannot be used for spills on water when dispersant and detergent are present as well as with liquids where a dangerous reaction may ensue.

Danny Matthews also presented the types and formats of sorbents which include loose fibre/granules/powder, cushions/pillows, booms/socks, sheets/pacts/rolls, sweeps/mats, pompoms and fllter systems. He then described their ranges, highlighting that the oil sorbents are ideal for removing oil from water due to their hydrophobic nature, can be used in bunds, on lakers, harbours, rivers and sea.

For chemical sorbents, he stated that they are fast acting, powerful with high material strength and liquid retention as well as suitable for use inside and outside for spills, leaks and drips of corrosive chemicals and hazardous liquids. Regarding sorbents maintenance, he explained that they are suitable for indoor use on oils, fuels, mild chemicals and non aggressive liquids excellent chemical resistance with instant high absorbing action and retention for rapid as well as cost effective spill cleanup. Concerning environmental footprint, he underlined that Darcy manufactures some of sorbents from recycled materials, e.g socks, cushion and pillows. About ecological disposal, he indicated that contaminated sorbents are likely to be classified as hazardous and special wastes and must be disposed of at a suitably authorized waste management facility. For Safety, he explained that all sorbents are safe to touch and advised to follow site safety/spill contingency plans, to be aware of the liquid spilt, to wear appropriate PPE and to ensure that used sorbents are safely stored.

Danny Matthews concluded with the developing for the future highlighting that Darcy Group will continue innovation to provide solutions and products that are more environmentally sustainable and will advance in the use of natural fibres and resources, e.g by products of the cotton industry, hemp etc..

Hugh Neatherway delivered a presentation titled “Using Absorbents – Practical Aspects”. He began by introducing himself and his professional experience in spill response and the names of projects in which he has been involved such as inland water spills, loss to ground, domestic heating oil loss, road traffic incidents and chemical and hydrocarbons. He then explained how to use absorbents and what they have been spilt.

Hugh Neatherway underlined the need to know what you are dealing with to be able to choose the right absorbents e.g petroleum hydrocabons, minerals oils, lubricating oils, chemicals and non-hazardous material. He stated that absorbents can be used in conjunction with other pieces of kit such as fence/retention booms, wood loose, liquid degreasers and skimmers.

Hugh Neatherway explained that booms if left can deteriorate and fall apart, can be heavy and can have vegetation growing through them, can sink with time and collect rubbish. He presented some examples of damage during deployment of booms due to vandalism and canal boat traffic. He underlined that weather conditions e.g freezing, wind and hot heather will need to be considered during deployment.

Hugh Neatherway presented many types of powder absorbents and stated that they can be really good and versatile but pose an issue in the handling, can be dusty and retain properties of absorbed materials e.g flammable. He talked about the biodegradable products highlighting that they are ecofriendly, can be left in situ in the correct circumstances and can also be used with other materials.

The Management Committee would like to thank UK & Ireland Spill Association for providing this opportunity to know more about absorbents.