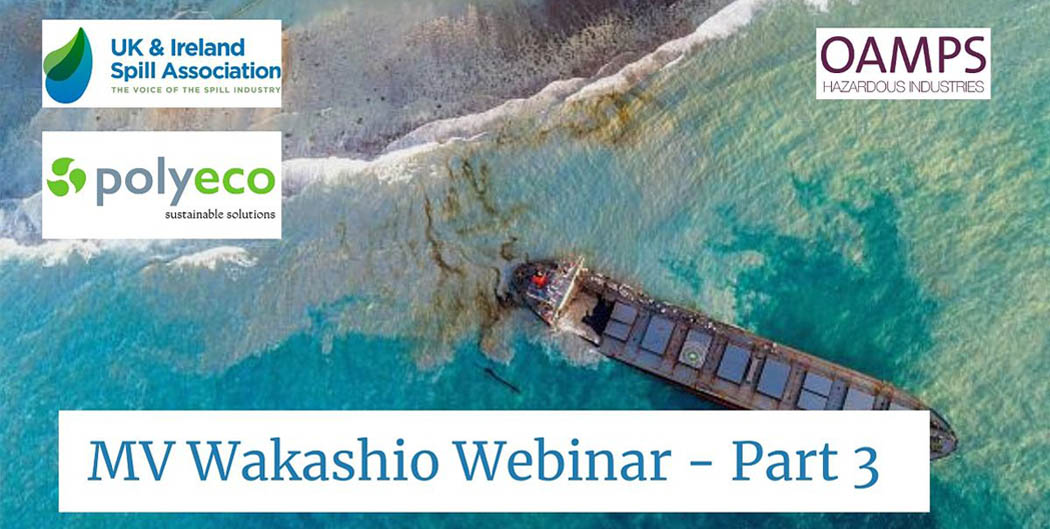 Mark Orr started by introducing UK & IRE Spill as a trade body for marine and inland response companies in the UK, representing contractors, manufacturers and consultants He underlined that UK & IRE Spill runs accreditation activities under its own scheme for inland oil and chemical spills. He presented MV Wakashio as a modern bulk carrier and its last 06 months work. He indicated that MV Wakashio was unladen when it ran onto a reef of Mauritius’ Pointe-d’Esny on July 25, 2020 at 19:15, while en route from China to Tubarão in southern Brazil. He explained that the vessel initially appeared stable, but after spending weeks on the reef, it eventually broke up, resulting in the release of some 1,000 tonnes of heavy fuel oil which seeped into Mauritius lagoons and created an environmental disaster. He described then the chronology of main events of the incident:

• 26 July : Coastguard visited MV Wakashio and Covid testing of crew completed
• 28 July : Mauritian Minister of Environment issues statement
• 31 July : SMIT team arrived on board to inspect vessel and assess damage
• 01 Aug : Tug boat Stanford Hawk supported operations around MV Wakashio
• 06 Aug : Oil leak
• 07 Aug : Prime minister declared a state of environmental emergency and requested French help
• 08 Aug : POLMAR shoreline response stockpile mobilized and arrived on island
• 10 Aug : Prime Minister tells the nation that the Wakashio is likely to break up and the worst case scenario is likely to happen as the boat will fall apart.
• 11 Aug : Oil spread further as hull breaches further
• 12 Aug : SMIT Salvage announced that oil pumping operations were completed.
• 12 Aug : The representatives of French Shoreline clean-up contractor “le Floch Dépollution” arrived on site
• 15 Aug : A crack in cargo hold N°8 to the starboard side of the vessel worsened and a major detachment of the vessel’s forward section was observed. Its estimated that 90 tonnes of fuel were still on board at the time of separation
• 24 Aug : Sinking of the vessel bow section
• 26 Aug : 18 Dolphins and whales was up dead on the Mauritian shores
• 28 Aug : Total increases to 39 whales and dolphins dead on the Mauritian shores
• 31 Aug : the tug Sir Geatan Duval collided with the barge towing and overturned 4 of the 8 person crew die.
• 09 Sep : The vessel deviated from its approved navigation plan.

Mark Orr raised some questions related to vessel change course to pass so close to the island in daylight, the contact between the vessel and the shore during the last 36 hours, the authorization of various course changes as she approached the shallow waters, attempt made the stabilize the vessel keeping the bow onto the reef during the heavy weather, attempt made to remove fuel from the lower fuel tanks to other compartments on the vessel, what happening in onshore, preparation undertaken in case of a spillage taking place, the POLMAR plan, if it’s really rolled in action to protect vulnerable sites. Mark Orr concluded by exposing a map illustrating the deployment of 3348 MTS of booms and 08 skimmers in order to protect the sensitive areas in the island such as blue bay Marine Park, Pointe D’esny, Point Brocus and MPA.

Kotas Chatzatoglou started by giving an overview about POLYECO Group, the history, the international infrastructure around the world and services provided on Waste Management & Environmental Services, Oil & HNS Spill Response and Circular Economy Solutions. He underlined that POLEYCO was present since the first days of the grounding of MV Wakashio and was appointed for the shoreline cleaning; waste management and oil spill preparedness during wreck removal & scrap decontamination. He explained the initial issues to overcome related to coordination with authorities & relevant parties, Covid 19 restrictions, experienced & trained personnel, equipment capacity/supply chain, NGO & Volunteers and reactions of residents and public.

Kotas Chatzatoglou gave an overview about the disposal facility and disposal method explaining that the waste will be processed through recovery operations (Exchange of wastes) in POLEYCO Facility in Greece. He explained that the process will originate an alternative solid fuel; which will be sent to the cement plants for the final recovery operation (Use principally as fuel) on one hand and an alternative raw material; which will be sent to cement plants for the final recovery operation (Recycling/reclamation of other inorganic material); on the other hand. He presented a time frame indicating that the repacking of 2700 tonnes of waste and shipment from Mauritius to Greece is scheduled between 15 to 28 March 2021 and the treatment and final disposal of waste in June 2021. He showed a map and photos illustrating the locations of artisanal booms and their collection and disembarkation points.

Kotas Chatzatoglou concluded by highlighting that analyses were performed on seawater, sediments and fish samples such as Total Petroleum Hydrocarbons (TPH), Hydrocarbon Aromatic Polycyclic (HAP) and Heavy Metals to assess their qualities with respect to the protection of aquatic life.